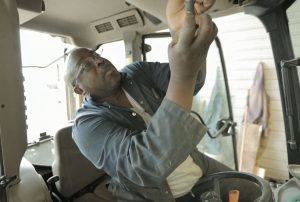 He’s originally from Trinidad and Tobago. 21 years ago, Marshall Schuyler, from Norfolk County, ON, recruited him to work on his farm. The opportunity changed his life.

With the money he made as an international farm worker, Gary put his two kids through school. Those kids are now grown up and have kids of their own. As a proud father and grandfather, Gary used his farm income to build a house for those kids and grand kids, and he continues to help by sending money back home.

But Canada is Gary’s home now, too. In fact, he used his farm salary to build himself a house just a short way away from the Schuyler farm, up Concession Road 13. He also married a Canadian girl. Guess who was his best man? Marshall Schuyler. The man who hired him all those years ago.

Thank you, Gary, for being part of our community and for doing the work that you do.

← AAFC announces a federal investment of up to $11.5 million to the Horticulture Cluster under the Canadian Agricultural PartnershipRestriction of Neonicotinoid Uses to Take Effect in 2021 →