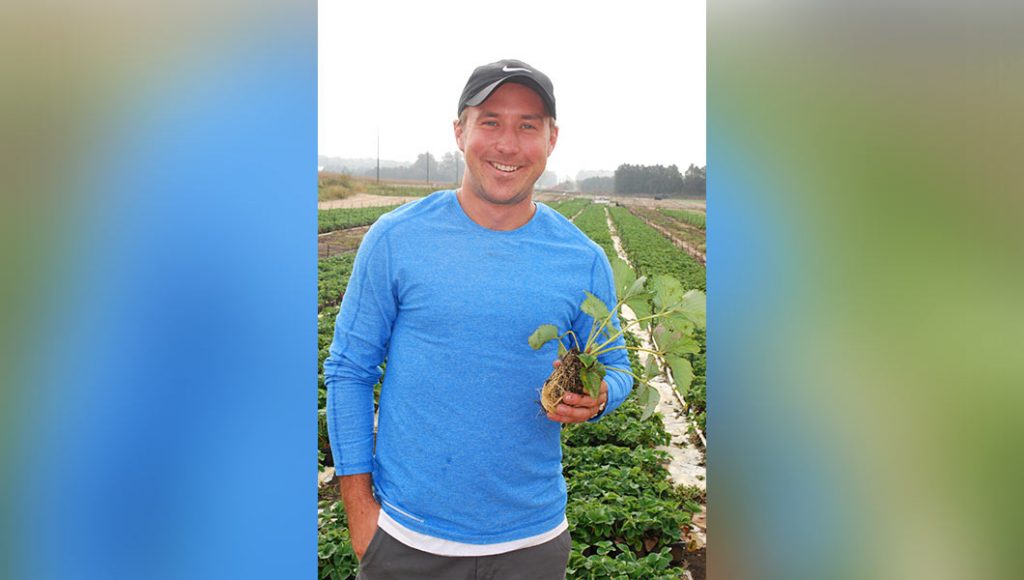 Dusty Zamecnik is a 27-year-old horticultural farmer in the lush farmland of Norfolk County, Ontario, which is situated close to Lake Erie’s north shore. Now production manager at his family’s EZ Grow Farms, Zamecnik returned to farming in 2014 after getting a business degree from St. Francis Xavier University in Antigonish, Nova Scotia and spending a bit of time working in brand development and sales for Labatt Brewing Company in London, Ontario.

“I want to be a driving force for the community where I grew up, and that’s part of the reason why I came back,” says Zamecnik, who grows strawberry plants for propagation, as well as highbush blueberries and hops. “It was good to be back on the farm.”

Zamecnik has been busy since his return. In May 2017, he purchased his own 75-acre spread as part of EZ Grow Farms, and he’s also started up a craft brewery called Hometown Brewing Co., which uses hops and blueberries grown on his land.

“I enjoy entrepreneurship, and I enjoy building something that I can call my own,” notes Zamecnik.

“This is really putting our brewery on the map, in terms of just what you can do with beer. It’s gorgeous,” says Zamecnik.

Zemecnik’s innovative efforts are getting noticed. This past October, he won the title of Ontario’s Most Outstanding Farmer for 2017. He travelled to British Columbia a month later to vie for the crown as Canada’s Most Outstanding Farmer with six other nominees. The national award ended up going to a young farming couple in Saskatchewan and another in Quebec (whom you can read more about on page 31).

“I didn’t come home with the hardware,” says Zamecnik, “but it was a great experience.”

Zamecnik is among eight full-time staff at EZ Grow Farms, which, like most fruit and vegetable operations in southern Ontario, relies heavily on seasonal workers. 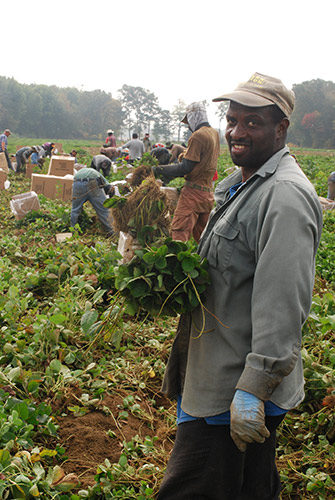 Rudolph Campbell of Jamaica is among the dozens of foreign workers employed each year by EZ Grow Farms. Photo credit: EZ Grow Farms.

He acknowledges it can be tough finding local people to work in horticulture jobs that are typically minimum wage, can be physically demanding, and often require long days. For locals, even though there’s money to be made, “they just don’t find it lucrative,” says Zamecnik.

For this reason, the majority of seasonal workers at EZ Grow Farms come from Jamaica, Trinidad and Tobago, and Mexico. Zamecnik states that a few of their international farm workers have been returning for over 15 years and are very integrated into the farm, often choosing to stay the maximum term.

“These men spend more time up here in Canada than they do at home,” indicates Zamecnik. “They’re like part of our family.”

Labour is so important in horticultural production because without an adequate workforce to grow and harvest produce, it can rot in the field, on the tree, or on the vine, resulting in food waste and financial loss for growers.

When Canadian producers are unable to find enough workers domestically first, they can access federal government initiatives like the Seasonal Agricultural Worker Program and the Temporary Foreign Worker Program to fill their labour needs. Under its labour advocacy mandate, the Canadian Horticultural Council (CHC) works with various government agencies to help ensure the smooth delivery of these programs to the farm industry.

Zamecnik notes that EZ Grow Farms relies on both the Seasonal Agricultural Worker Program and on an Ontario organization called the Foreign Agricultural Resource Management Service (FARMS) to help them find workers.

“I cannot really commend the Canadian Horticultural Council enough for the work that they do. It’s amazing,” he says. “I think it would be great if they could really help spotlight what’s happening at the farm level, because without these programs you better believe that food is going to be four times the price.”