The Canadian Horticultural Council (CHC) was recently in Barbados for the 2017 Annual Review Meeting of the Canadian/Caribbean Seasonal Agricultural Workers’ Programme (SAWP). According to Murray Porteous, Chair of CHC’s Labour Committee, it was the “most congenial and positive meeting we’ve had in at least 6 years. Everyone was very happy with the outcomes.”

Note: A correction has been made to the following paragraph. Although there was initial indication by the government that a positive answer on this was forthcoming, the final decision has not yet been made.

One such positive outcome was that Employment and Social Development Canada (ESDC), the ministry responsible for administering the SAWP in Canada, announced that it is considering dropping the requirement to advertise a position for two weeks before workers can be transferred between farms. Employers would still have to apply for a Labour Market Impact Assessment (LMIA). CHC has asked the government to go even further and drop the requirement to advertise a position when a worker needs to be replaced completely (for example, in the case of grave illness, or family emergency). The government is now considering this request. 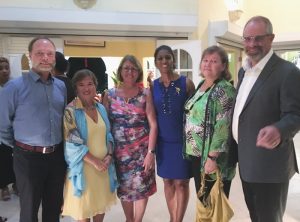 ESDC remains focused on worker protection and gender equity, in both the SAWP as well as the Temporary Foreign Worker program (agricultural stream).

Because various sectors seem to attract a predominance of one gender over another, CHC encouraged the government to consider employment equity between genders at a country level, rather than at an industry or sector level. If, for example, we look at all workers from Barbados who are employed in a Canadian job, it is possible that we will find that both genders are much more equally employed than they would be if we were to look at just one specific industry, such as farming, which tends to hire more men, versus hospitality and homecare, which tends to attract more women.

The Seasonal Agricultural Workers Program (SAWP) is a tripartite agreement between Canada, Canadian employers, represented by Foreign Agricultural Resource Management Services (FARMS) in Ontario, Fondation des Entreprises en Recrutement de Main-d’œuvre agricole Étrangère (FERME) in Quebec, and the BC Agricultural Council, and participating CARICOM countries. The Canadian Horticultural Council is a signatory of this agreement. In this context, the role of the CHC Labour Committee Chair is to build consensus and understanding between Canadian employer groups and Canadian government representatives.

SAWP has been incredibly positive for employers, workers and source countries. The SAWP contract is reviewed every year so that it can continue to be refined and improved.