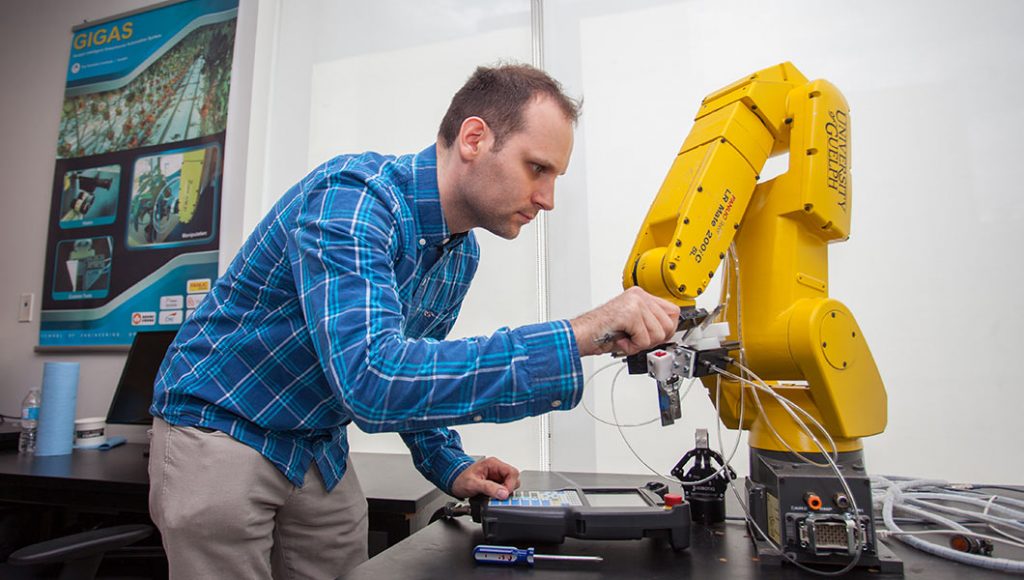 A disease-detecting robot devised by scientists at the University of Guelph is undergoing testing at a commercial greenhouse in Ontario. What could this mean for Canada’s greenhouse industry?

One of the most dynamic forms of technological advancement today is artificial intelligence. Its use in such fields as transportation, health care and finance is growing every day, and intelligent machines are also poised to make significant inroads in agricultural production.

Here in Canada, a prime example is the Guelph Intelligent Greenhouse Automation System (GIGAS) robot devised by researchers at the University of Guelph’s (U of G) Robotics Institute.

The research team, led by U of G engineering professor Medhat Moussa, has developed the GIGAS robot to perform greenhouse tasks, like harvesting tomatoes, peppers and cucumbers, that are normally done by humans.

Following successful proof of concept tests, the GIGAS robot began longer term testing at a commercial greenhouse in Leamington, Ontario, this year. According to Moussa, a second prototype with enhanced pest and disease detection capabilities is currently undergoing testing before being deployed at a second greenhouse.

Moussa suggested that the main benefit of a disease scouting robot is in reducing risk for greenhouse producers.

“It’s really very important to make sure you are controlling any disease breakout. Otherwise, you can lose your shirt in a hurry,” he says. “We are interested in providing the grower with an early warning system, basically.”

According to Moussa, GIGAS uses technology that enables diseases to be identified before they develop into the visible spectrum, meaning disease suppression can occur sooner.

Moussa reported that GIGAS can currently scan for powdery mildew and detect it early on. Moussa’s team is working on adding pepper weevil detection to the system in response to growing concerns about the pest among Ontario’s greenhouse growers, and there are plans to expand the programming to eventually include more pests and diseases.

GIGAS incorporates sophisticated hardware and software and is driven by data. Central to its design are two key aspects of artificial intelligence— machine vision and machine learning. 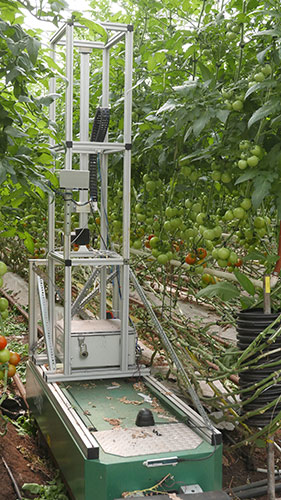 The first prototype of the GIGAS robot at work at a commercial greenhouse in Leamington, Ont. Photo: The Robotics Institute @ Guelph.

An advanced vision system incorporating various cameras and sensors is used to generate images and different types of data about the plants. This data is processed through complex algorithms that enable the robot to make multiple decisions as it performs its tasks in the greenhouse.

“There is an enormous amount of information processing going on,” notes Moussa, adding that greenhouses pose much more of a challenge for robots than a factory floor, for example, because there’s so much more clutter in the environment. “It’s like a jungle because the density of the plants is very high.”

The GIGAS robot includes an imaging tower, which holds cameras and other equipment like heat and hyper-spectral sensors, as well as a robotic arm and an assortment of grippers.

Moussa says the idea for GIGAS took shape in his U of G lab back in 2009.

“It’s a very ambitious project because it includes various stages. The actual platform took a lot of our time because when you’re dealing with a robot that is roaming around a greenhouse where there are people, you have to be concerned about safety, of course,” he says, adding that GIGAS has built-in safety sensors that prevent the robotic arm and grippers from harming workers.

Moussa acknowledges that in order to drive adoption, innovations such as GIGAS have to be affordable for growers. He says that’s getting closer to becoming a reality, due to rapid advancements in robotics that are driving down costs.

Moussa foresees a day when robotic systems such as GIGAS are widely used to harvest vegetables in commercial greenhouses, enabling producers to cut down considerably on their labour costs. He believes that’s an important consideration in jurisdictions like Ontario, where the government is planning to hike the minimum wage to $15 an hour by 2019.

Moussa hopes to have two or three more GIGAS prototypes employed in the field within the next few years. “If this technology is going to move faster, it needs to be tested more and more in real-world conditions,” he adds.

According to Moussa, one of the things growers can do to help drive innovation like this would be to offer up their greenhouses as a location for future GIGAS trials.

Anyone who is particularly keen on advancing such a system could even consider contributing funding for a GIGAS prototype that could be used in their own greenhouse, Moussa notes. Those interested in accelerating the development of GIGAS by becoming an early adopter of the system are welcome to contact him.

“The early adopter is taking more risks, of course,” Moussa admits. “But then, once this system is ready for commercialization, they’ll be first on the list.” For more information on GIGAS, visit http://robotics.uoguelph.ca or contact Professor Moussa at mmoussa@uoguelph.ca.