The Canadian Horticultural Council (CHC)'s 2015 Annual General Meeting (AGM) in Quebec City was, by all accounts a success. As is the case every year, the AGM is an opportunity for members and industry partners to come together to work collaboratively to create a path forward for CHC for the coming year and beyond.

Congratulations to Marcus Janzen from Abbotsford, BC for receiving the 2015 Doug Connery Award. The award is given to a member of Canada’s horticulture community who works to improve the sector through efforts at the local, provincial and national levels. Marcus is a past CHC President (2006) and President for the BC Greenhouse Growers’ Association (2001 to 2008). He is active in his local community to create awareness about growing practices and the importance of Canada’s horticulture sector.

Thank you to our sponsors

CHC would like to extend a warm thank you to all of our sponsors who were able to help us in making this year’s AGM a success. 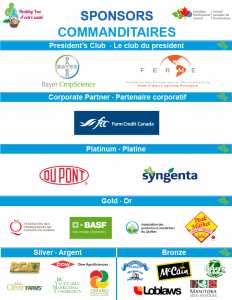