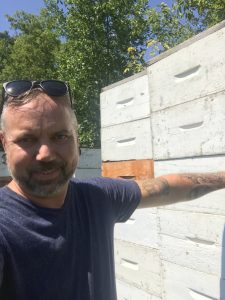 Allan grew up in the beekeeping business and was comfortable around bees since he was probably 4 years old. Son of a beekeeper, and now running a 3rd generation farm with 3000 colonies that got its start in Dauphin, Manitoba in the late 1930’s. Primarily honey producers for most of that time, Allan spread his wings a bit, if you will, taking bees West and started a pollination business first in BC’s Okanagan-Similkameen valleys where he first leased bees to a local beekeeper for apple pollination and later moved hives to the lower mainland’s Fraser valley and now supplies 1500-2000 hives for high-bush blueberries, raspberries and cranberries before bringing everything back home to Manitoba for major honey production in canola, clover & alfalfa country. Allan dedicates his time to both his craft and his industry, as a director and past President of the Manitoba Beekeeper’s Association and a director on the Canadian Honey Council and appointee to the Honeybee Health Roundtable. His talk today will be about his experience with migratory beekeeping and honeybee pollination.